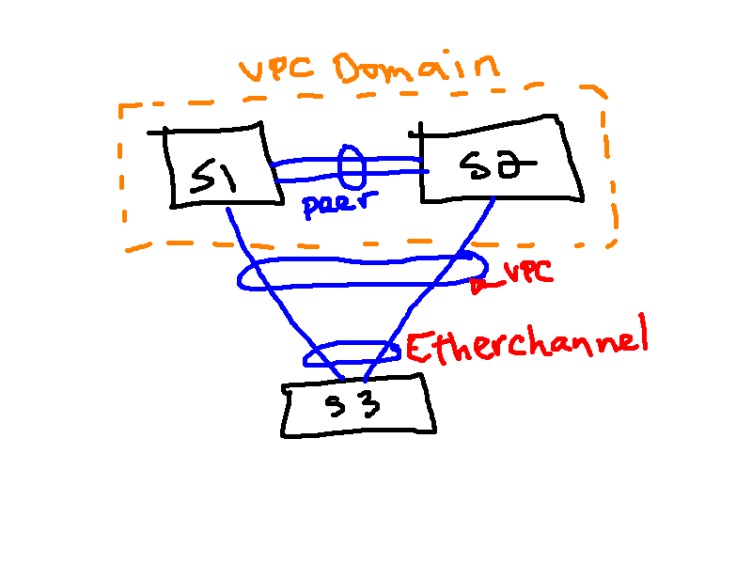 Cisco’s vPC is a virtual port-channel which allows links physically connected to two different switches to appear as a single device to a downstream device as part of a single port-channel.

A vPC is configured on a Cisco Nexus switch and allows Layer 2 port-channels from a downstream device to span two separate switches.

vPC consists of two vPC peer switches connected by a vPC peer link. One switch is primary and the other is secondary. A vPC domain is formed by both Nexus switches. A Nexus can only be part of one vPC domain and only two switches can make up a vPC domain.

vPC peer link creates a single control plane which forwards BPDUs or LACP packets from the primary vPC switch to the secondary vPC switch. A vPC peer link is formed into a port-channel which can be a maximum of 16 ports but at a minimum it should be 2 ports. The peer link synchronizes MAC addresses and STP BPDUs.

In addition to the vPC peer link, there is a peer keepalive link which monitors the vPC peer switch. A keepalive link can be configured using the management interface or through an SVI. There is no data sent over this link. It’s sole purpose is for vPC keepalives.

A vPC port is a port assigned to a vPC channel group. Ports part of the vPC are split between the vPC peers.

Components of a vPC

Connect each switch together to create a vPC peer link. You need two 10 GbE interfaces.

Are you ready to improve your wireless network?