In the wired world, to connect to the network you would plug in your Ethernet cable into the switch. In the wifi world, you must connect to the access point. The process of connecting to an access point is called the 802.11 State Machine.

How does the station (STA) and access point agree to this connection?

I’m going to attempt to break it down step-by-step on this post.

In my example, I have one STA connecting to an open SSID. The summary of it all is as follows:

The STA begins the process by performing a passive or active scan. In the passive mode, the STA is listening for beacons from an access point. The beacon frame contains the BSSID which is the MAC address of the radio sourcing from the access point.

The beacon frame is a type of management frame defined in 802.11-2007. It includes capability information and parameters. 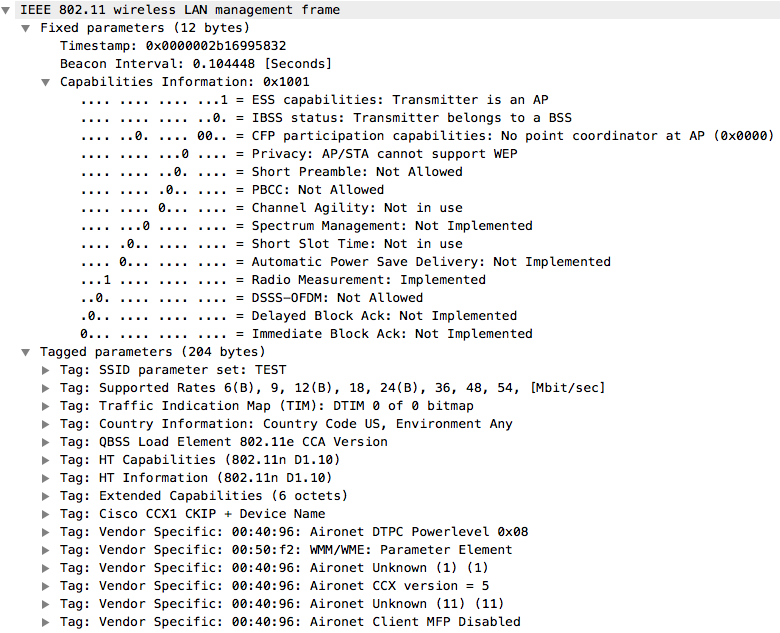 In the probe request you will find the parameters as shown below. This is an example probe request from a STA broadcasted to any access point that can respond. The wireless network requested is eduroam. 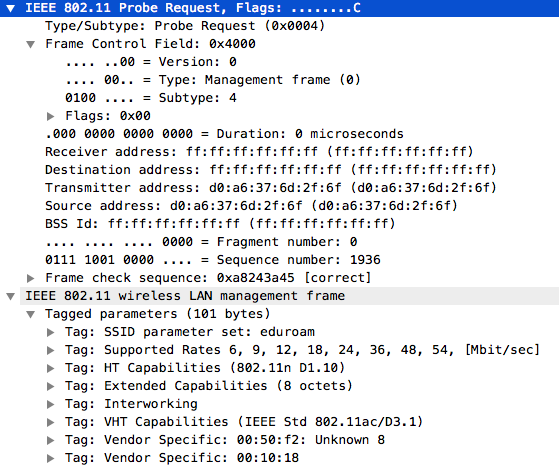 The STA must be authenticated to the access point before it is associated. It sounds backwards. These are the two states in this phase and it must be done in this order.

A STA can be in either two states in Authentication and Association:

Notice above, the Authentication Sequence is set to a state of 1. 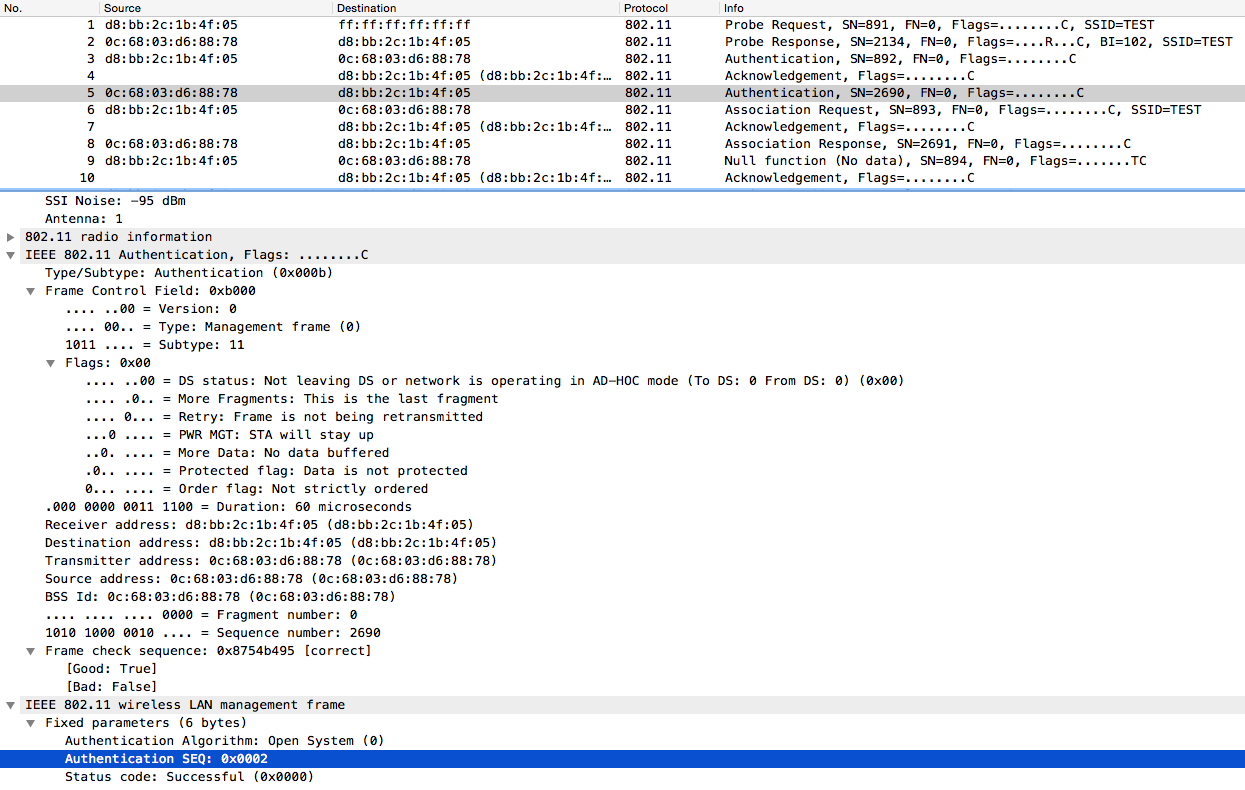 Access point sends an Authentication frame with a state of 2, for Successful.

Open System performs no client verification. This is the method used with SSIDs utilizing WPA, WPA2, and those with no password.

After the the access point sends an Acknowledgement to the STA’s Authentication Response, the STA sends an Association Request.

If the association is successful, the access point’s Association Response frame will contain a Status code: Successful. 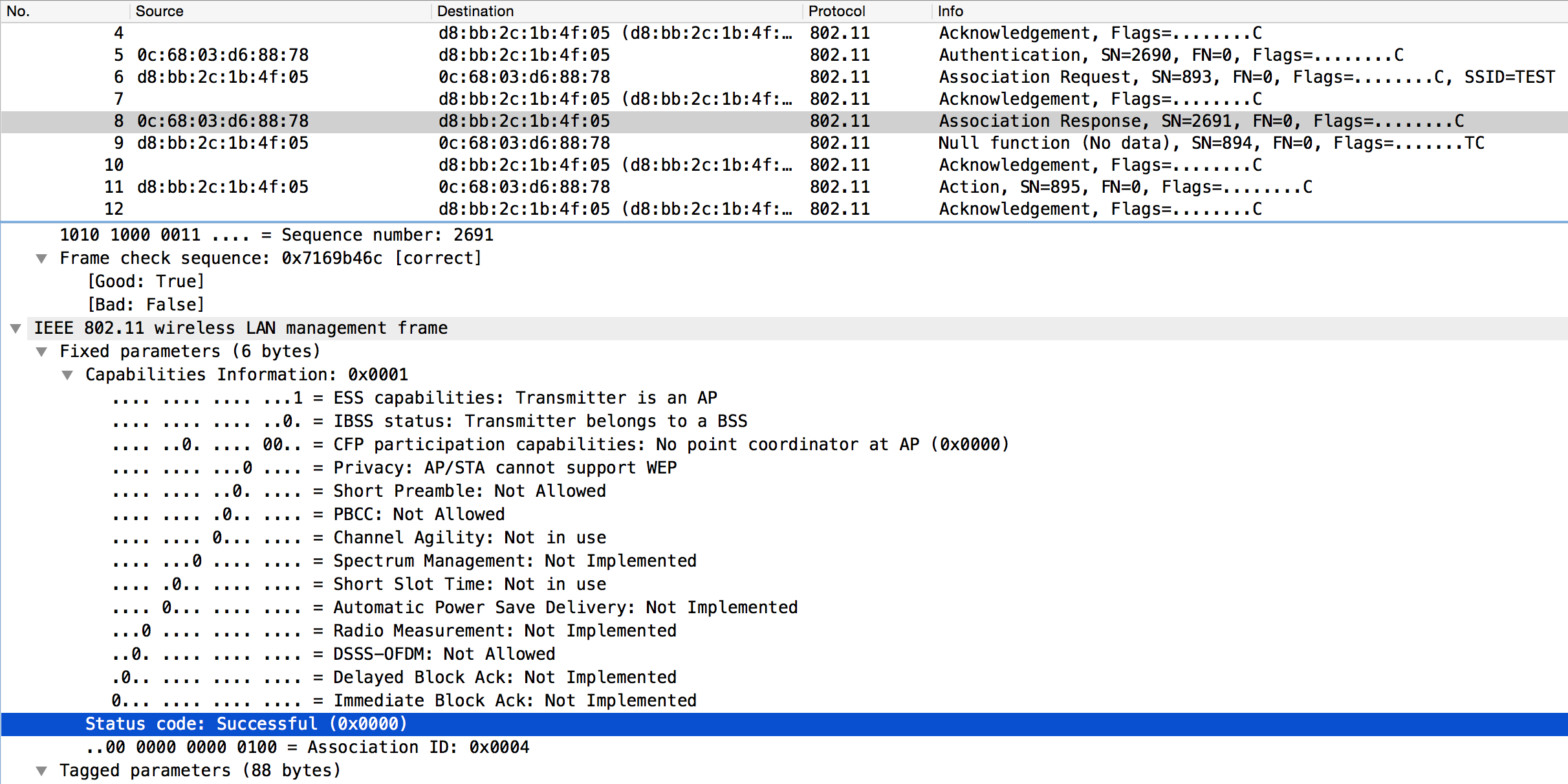 The details within an Association Response include:

If the Status code is anything other than Successful, then the STA is deauthenticated.

The example above uses a STA that is trying to connect to a wireless network for the first time. The SSID is called TEST and does not have a password set up.

The STA probes for the SSID, moves into Authentication, transitions into Association, and is then successfully Authenticated and Associated. This last part indicates the STA can now send data wirelessly on the TEST network.

Below are the states a station cycles through to join a BSS:

Are you ready to improve your wireless network?